Pleasure gardens and arboretums at Cadolzburg

The oldest indication of a castle garden outside the walls of Cadolzburg is to be found in a list of land-owners’ possessions (land register) dating from 1464. The earliest proof of a garden within the castle walls is a drawing by the landgrave Moritz von Hessen dating from 1629. In this sketch, the area between the horse pond and the moat is described as a "pleasure garden". The narrow meadow areas between the two baileys surrounding the main castle were planted in the 18th century with high-stemmed fruit trees. There were also two large meadows outside the castle complex with fruit trees. 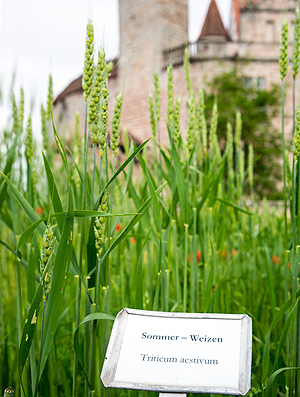 The walled castle garden – with a display of historical grain varieties

The walled castle garden is divided into various zones. The higher garden area is structured with a network of paths. All that remains of the garden pavilion that once stood in the south corner is the sandstone base. The Bavarian Palace Administration has planted this part of the garden with a display of many different historical varieties of grain (apart from rice). Free recipes are also available for some of the grains.

The lower section of the garden, separated by a hedge, is closed off on the east side by a high fortified wall and at the northern tip by a small, fortified belvedere with a tiled tent roof. The flower meadow with a path winding through it is planted with high-stemmed fruit trees.

The Palace Administration however also has further plans for the walled castle garden involving the garden plants of the Middle Ages and the Renaissance, which are to be shown in a setting that recreates the original features of a medieval garden (grassy banks, high beds, simple small sculpted and tub trees etc) At a later stage, the narrow meadow areas between the two baileys surrounding the main castle will also be planted again with high-stemmed fruit trees and opened up to visitors.

Picnic seats for visitors are available in a separate small garden. In the outer ward the large seat surrounding the old linden tree on the lawn in front of the castle garden is also an ideal place to relax while enjoying a picturesque view.

Washing place for horses and carts – the horse pond 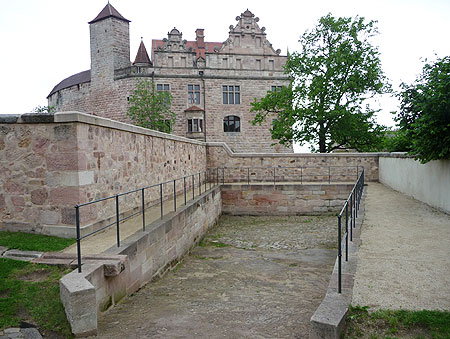 Next to the walled castle garden is the old horse pond, parts of which may even date back to the Middle Ages. The horse pond was an important element of the domestic facilities in the outer ward until the late 18th century, and in the 19th century served as a reservoir for fire-fighting purposes. In the mid-20th century, the part of the pond above ground was removed and the water basin was filled up.

In the course of the archaeological excavations carried out during the renovation and restoration of the outer areas of the castle complex, large sections of the pond were uncovered. As they were well preserved, it was decided to carefully complete and repair them. With the restoration of the garden wall which surrounded the pond on three sides, the original layout of the outer ward was re-established.

Recommendation in the social media